Weather changes according to season. These changes in the atmosphere affect all living beings. Some changes are beneficial, while others are detrimental. In order to achieve maximum benefits from the good qualities of the atmosphere and protection from the bad effects, Ayurveda has prescribed certain guidelines about diet and life style called seasonal regimen i.e Ritucharya.

Two energy principals, Hot and Cold (ie, Yang and Yin), govern all activities in the universe. Based on this, the entire time span of the year has been divided in to two parts, Accumulation (Adana) and Release  (Visarga)
We can neither control Mother Nature nor the changes in it. To balance the seasonal changes Ayurveda has described some guidelines called seasonal regimen or Ritucharya.
Due to changes in the season, doshas have the cycle of Sanchaya (accumulation), Prakopa (aggravation),  Prashama (palliation). These changes reflect in our bodies so we need to adjust our routine i.e diet and life style to prevent the imbalance.
Dosha cycle in a year: 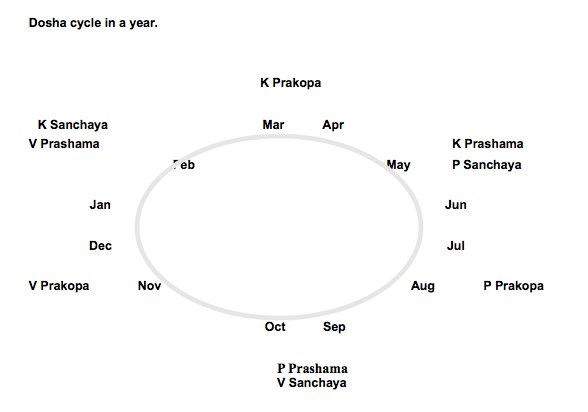 Kapha is aggravated in Spring (mid February to mid June), Pitta in Summer (mid June to mid October) and Vata in Fall and Winter (mid October to mid February).

It is not really the calendar, but nature itself that tells us when the Dosha will be influenced. Therefore one should not indulge in things like food and acts, which are likely to increase or provoke the respective doshas.

In India, the whole year is divided into 6 seasons.
In the US, there is a vast difference in the weather pattern in different states.
In Ritucharya, the same Dinacharya should be followed. Ritucharya fine-tunes it, depending upon the individual Constitution.
(many thanks to James Bailey for this excellent information.  visit his excellent website for more information regarding Ayurveda and Oriental Medicine )