perihelion – περιήλιο – close to the sun

The day that the earth and sun are at their closest point is called Perihelion.

You maybe haven’t heard that Greek word before or if you have you don’t know when it happens.  Pretty much everybody knows when the solstices and equinoxes occur.  Yet when the earth is closest to the sun remains elusive to most people.  It is not mentioned in the media.  Not even a casual factoid on the nightly weather report. There is no holiday that commemorates that day.

It is a basic fact, but not common knowledge. 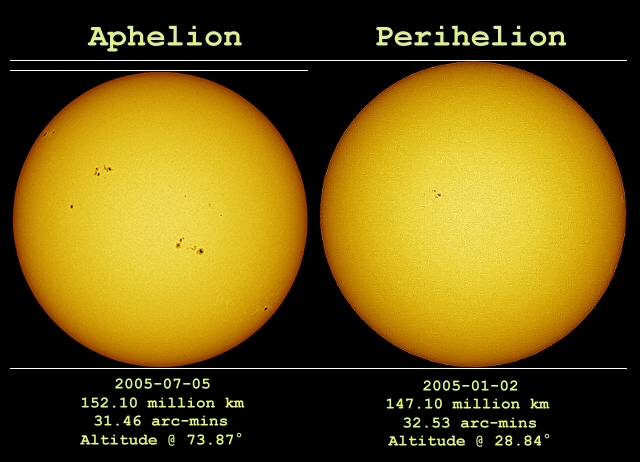 This significant yearly event is never even casually mentioned in the weather reports.

In fact, most otherwise well educated people I ask don’t have the correct answer either.

When is the perihelion?

Many people are surprised to know that the day the earth is closest to the sun is in fact around January 4th. (I say around because it does wobble a bit between January 3rd-6th because the earth’s orbit around the sun is affected by other factors such as the orbits of the other planets.)  For the sake of argument let’s just assume that January 4th is Perihelion Day.

This may seem contradictory at first.  After all January 4th is a cold dark winter day. In fact It is two weeks after the shortest, and darkest day of the year.  Shouldn’t it be warmer not colder if the distance is closer?

Well that would only be true if you live in earth’s Northern Hemisphere.  Anybody south of the equator is celebrating New Years in the middle of summer.

When The Earth Is Near The Sun Is Uncontroversial. It Is Fact.

Practically everybody knows when the solstices and equinoxes occur, hardly anyone can tell you the date of perihelion. Most do not even know the time of year it happens

The dates of Christmas, Valentine’s Day and Halloween may seem significant but also arbirary when we know how they have been established and moved throughout history.

Yet basic fact of life as the fluctuating distance of the sun remains completely unknown to most people. 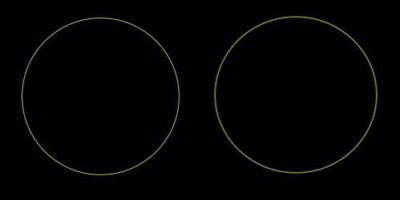 Earth’s distance from the sun is constantly changing. speeding up and slowing down. A predictable asymmetrical pattern throughout the year.

This elliptical orbit is described by Kepler’s three laws of planetary motion. 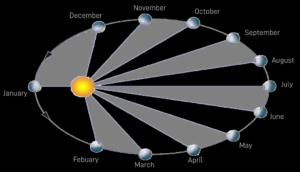 The Farthest Point Is Called Apehelion 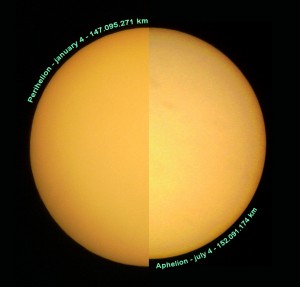 Johannes Kepler (December 27 1571) born to a poor mercenary in Württemberg, Germany, who tracked the orbital path of Mars and published his three famous laws of planetary motion — which validated Copernicus’s theory of a sun-centered solar system — and later helped Isaac Newton discover the law of gravity.

Kepler was nearly blind from a smallpox epidemic when he was three, and he developed the first eyeglass designs for nearsightedness and farsightedness.

Kepler was a pioneer and was first

The planet is traveling through space at approximately 1000 meters per second faster at perihelion than at the farthest point. That would be 3,600 mph faster than about 67,000 mph on average.

Which is about 4 times faster than the International Space Station orbits the earth. At this speed, you could get from Los Angeles to New York in 3 minutes.

Perihelion Is Not Winter Solstice

Distance of the earth from the sun has nothing whatsoever to do with earth’s Axial tilt. But the angle of the tilt and orbit do wobble which causes ice ages.

The length of days is due to the earth’s 23 degree tilt on its rotational axis.

Paradoxically the four seasons, have nothing to do with the proximity of the sun either.

The Sun; How Big? How Powerful? 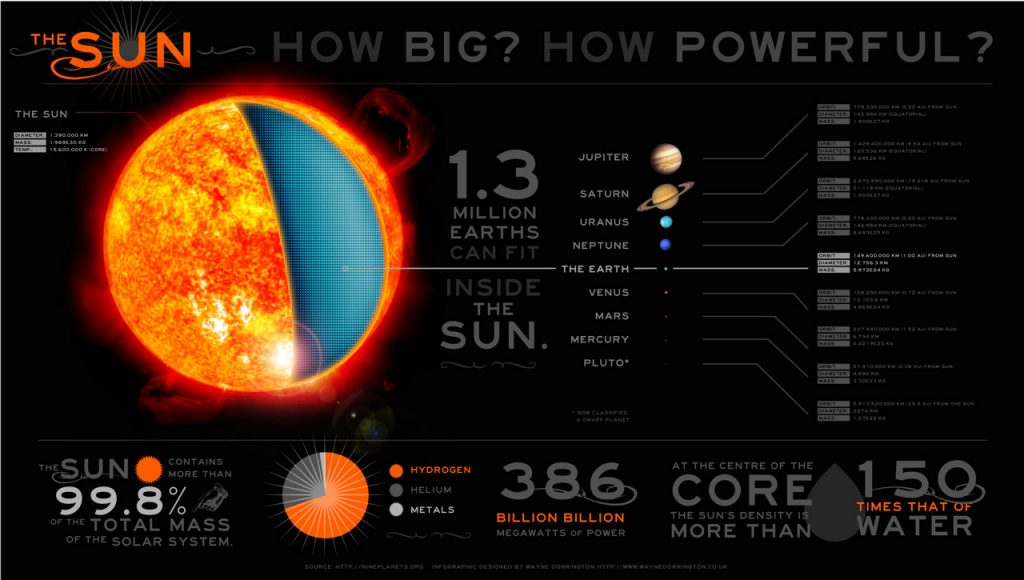 If you reside in the Southern Hemisphere, in a city like Buenos Aires, Cape Town, or Sydney, it may not seem so strange that January is the closest proximity of the earth and the sun. In fact, in certain latitudes, January can be extremely hot. This Northern Hemisphere bias is inherent in the perihelion effect’s misinterpretation. That civilisation, which developed primarily north of the tropics, has likewise affected that viewpoint. For hundreds of years, it has generated so much consternation that it has disregarded the obvious. Winter solstice in the northern hemisphere corresponds to summer solstice south of the equator.

Date of the Perihelion is moving forward

Over the past 2000 years, the perihelion has shifted from December 17 to January 4.
It will fall on March 21st, 3200 years from now, on the spring equinox. 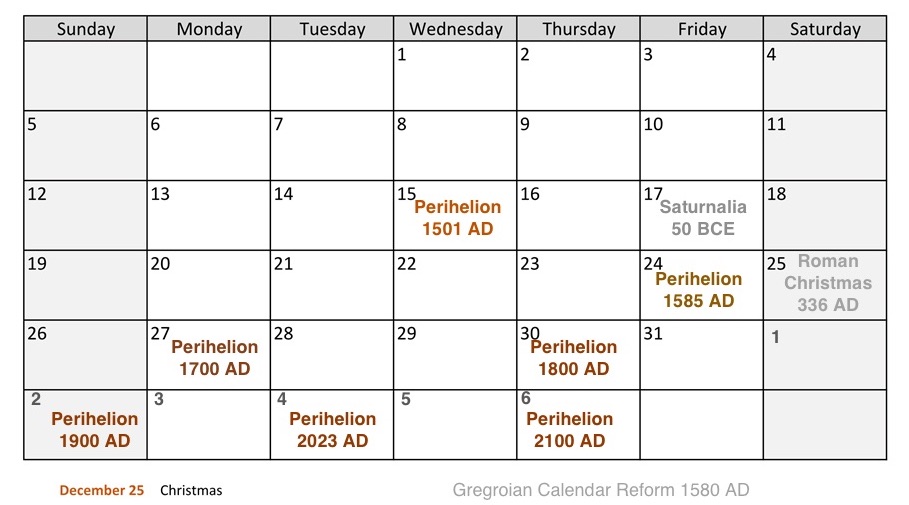 If you ask mainstream scientists they would say

‘There is no effect of eccentric the orbit of earth around the sun.’

There are no ‘known’ effects of the proximity of the earth to sun because this type of paradigm has not been yet examined.

This website explores possible connections between the orbit of the earth and the wide ranging evidence that is embedded in the calendar and personal sense of time. 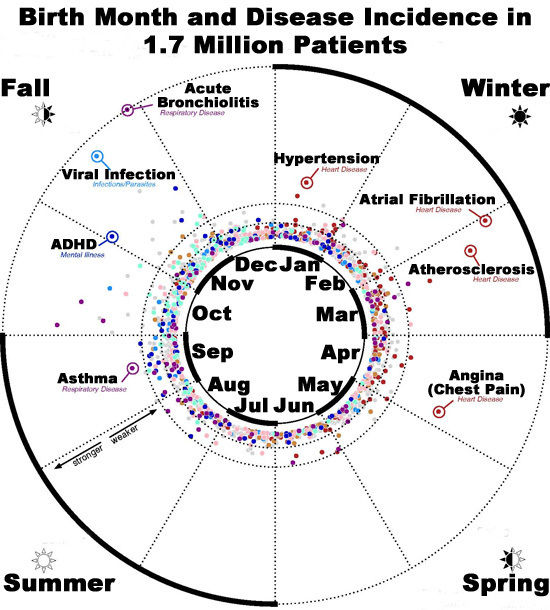 It is conceivable, and perhaps even more likely, that there is a link between the calendar and human health, but no global multidisciplinary study has been conducted.

With the acquisition of global data, chronobiology and the study of seasonality trends are only now emerging as new relevant topics of inquiry. 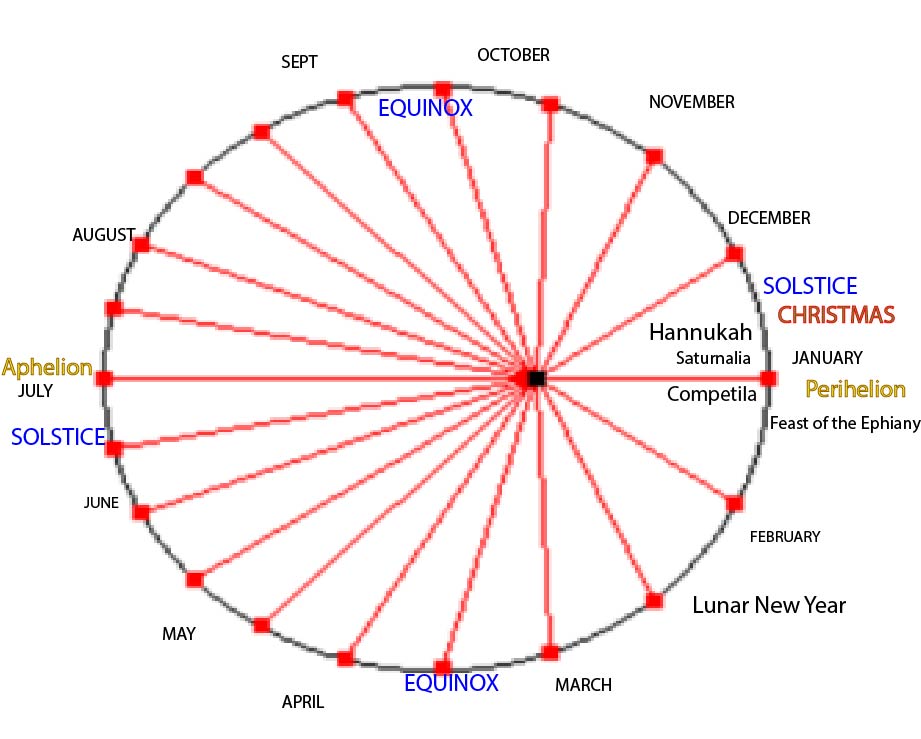 Some label such radical supposition as ‘pseudoscience’.

Keep in mind – phenomena observed but which lacks a measurable explanation is, by definition, part of an outmoded paradigm. This calls for a shift in our awareness of time; empirical, collective and subjective as well.

Perihelionism, on the other hand, is a higher level mental activity. Both sides of the brain collaborate to develop a new viable paradigm.

Awareness expansion is the organizing principle.

We explore a new paradigm based on a new holistic orientation to the sun.
GPT CHAT RESPONDS
GPT RESPONDS:

It is true that phenomena that are observed but lack a measurable explanation can be seen as part of an outmoded paradigm. This can lead to a shift in our understanding of the world and the way we approach scientific research. It may also require reevaluating our current models and theories, and possibly developing new ones to better explain the phenomenon.

The concept of time is a complex one, and there are multiple ways to consider it, including empirical (based on observation and measurement), collective (based on societal and cultural perspectives), and subjective (based on personal experience and perception). Understanding how these different perspectives on time can impact scientific research can help broaden our understanding of the world and lead to new discoveries and advancements.

Additionally, recognizing the limitations of our current paradigm and being open to new perspectives can help foster scientific progress, expand our understanding of the universe, and promote world unity by fostering a shared understanding of our place in the world. 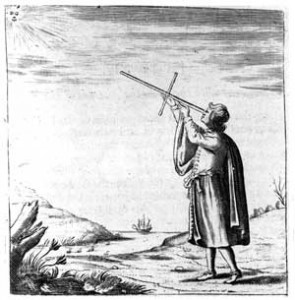 Earth at Closest distance to the sun could this be influencing you in ways you are not aware of? how does the perihelion affect you?   The constantly changing distance of the earth to sun plays a significant role in global seasonal phenomena, which is distinct from the four seasons resulting from the 23.5˚degree tilt of it’s axis. Is there 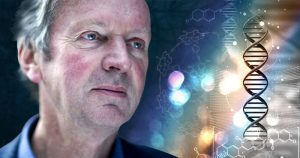 By Joseph Schuster, December 21, 2018 I recently shared the The Perihelion Effect website with Dr. Rupert Sheldrake acclaimed author of The Science Delusion and researcher in the field of parapsychology, who developed the concept of “morphic-resonance“.  https://www.sheldrake.org/  Dr. Sheldrake: Does Earth’s Eccentric Orbit Affect Consciousness? Earth’s perihelion, its annual closest point to the sun, accounts for an observable cycle which has global effects. 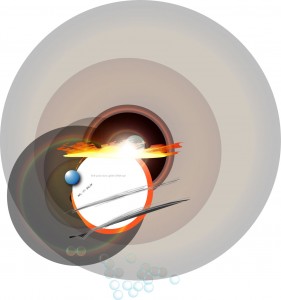 The Origins of Perihelionism What Role Does The Variable Distance To The Sun Play In The Seasons On Earth And How Does That Affect Me? A Thought Experiment – Conscious connection to time The concept behind World Perihelion Day is based in fact. This holiday is unique because it is not based in subjective ideology.  Earth and everything on

Reading Thomas S. Kuhn’s book was an enlightening experience. Much more than a mere compilation of facts, Kuhn’s brilliant and insightful writing exposes the very roots of the problem of writing a “history of science.” Whereas other books I have read on the subject, have made their case based soley upon an abstract historicism, or a factual mishmash of dates, 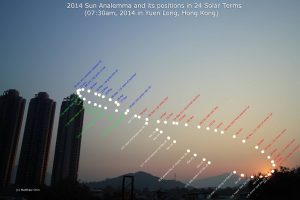 The Equation of Time

Equation of time From Wikipedia, the free encyclopedia. Categories: Celestial mechanics | Timekeeping During the course of the year, the time as read from a sundial can run ahead of clock time by as much as 16 min 33 s (around October 31–November 1) or fall behind by as much as 14 min 6 s (around February 11–12). This difference, known as the equation of time, results from a combination of the tilt of the Earth‘s rotation axis 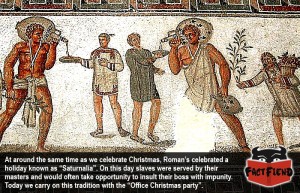 winter stories of reversals of fortune

Holiday musings: Reversal of fortune is one of the most common themes of Christmas stories and movies. Stories of personal crisis and loves won and lost seems to be inherent in the season. You would be surprised to know that this idea dates back to over 2000 years ago to the celebration of Saturnalia where masters and slaves reversed roles. 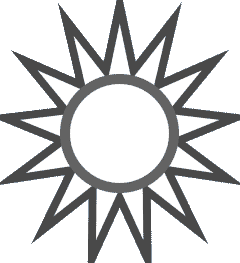 Aphelion July 4 Earth’s Eccentric Orbit Is Cause For Celebration! Why Is There Is No Yearly Holiday Or Observance Of Earth’s Farthest Day To Be Found 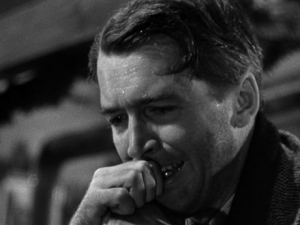 why do people experience holiday stress?

We are all familiar with the idea of holiday stress.  That feeling that time is going by faster and faster from Autumn until New Years.

Today the earth is moving AWAY from the Sun 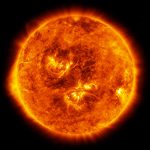 Aphelion, the point in the orbit of a planet, asteroid, or comet at which it is furthest from the sun. 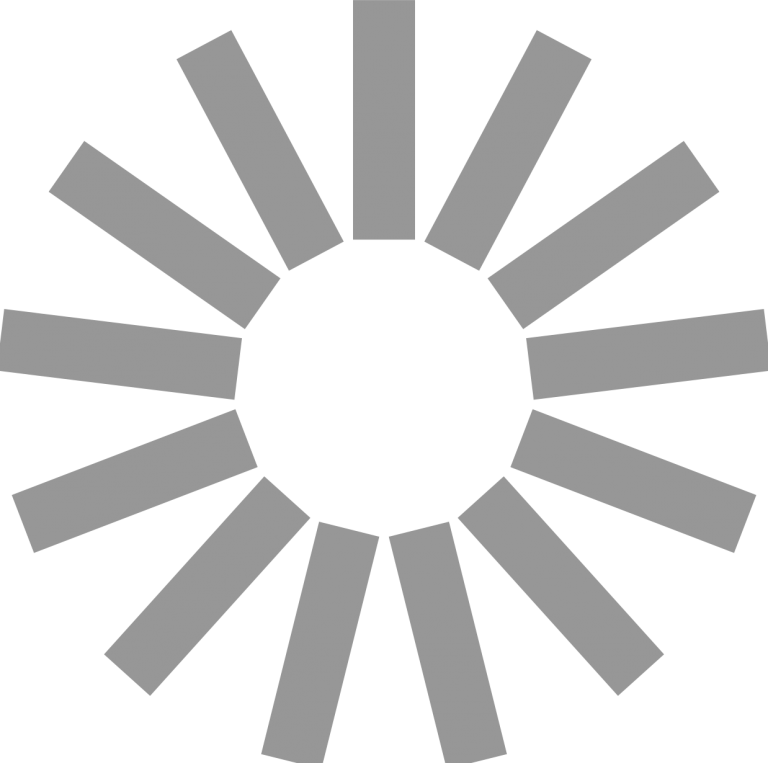 Earth's closest distance from the Sun

could a yearly phenomena of nature be influencing you in ways you are not conscious of?